Interesting transfer news are out claiming that Arsenal are on the brink of signing Barcelona teenage striker Toni Sanabria. 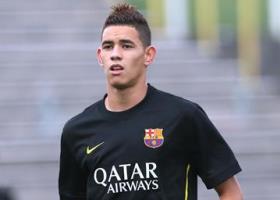 The Daily Mail reported that the Paraguay international striker is set to sign a five-year deal with Arsenal after telling the Spanish giants he wants to leave.

His agent Raul Verdu said: “Our contacts with Arsenal are advanced and I expect a solution in the next week.”

Arsenal are due to meet with Barcelona and Sanabria next week to finalise a deal and also gain clearance from both federations.

The Gunners are likely to only have to pay compensation of around £300,000 for Sanabria.

Bacary Sagna On The Brink Of Signing New Arsenal Contract