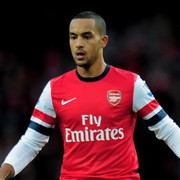 The England international winger was back on the bench again on Saturday against Manchester United despite scoring a hat-trick in the 7-5 Capital One Cup win at Reading in midweek.

Adams said: “The big one at the moment is Theo — but what incentive has he got?

“I don’t think it helps that he got a hat-trick in the week and then he’s on the bench at the weekend.

“I’d like to see him up front but I’d also like to see Van Persie, Samir Nasri and Cesc Fabregas still at the club.

“You can go back to the days of Ashley Cole going to Chelsea, so many have moved on and are doing jobs for great teams.”