It has been reported that former Tottenham boss Harry Redknapp feels Tony Adams should succeed Arsene Wenger as manager of Arsenal. 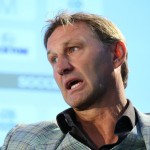 Redknapp believes the former defender would do a good job.

He told the London Evening Standard: “Why shouldn’t Arsenal give Steve Bould a go? Or Tony Adams?”

Adams struggled during his stint with Portsmouth between 2008-2009, having previously taken charge of Wycombe Wanderers.

He coached Azerbaijani outfit Gabala between 2010-11, his most recent role.