It has been reported that QPR chairman Tony Fernandes is convinced they can upset Manchester United on Sunday. 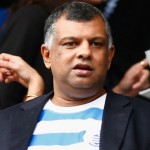 Fernandes, who watched his side beat Sunderland 1-0 at Loftus Road before the international break, believes his side should be confident when they take on the Red Devils.

He told the London Evening Standard: “United have one player (Angel di Maria) worth more than my squad but they have not won yet. We have. Right now they will be nervous about playing us.”

Harry Redknapp’s side began the season with defeats to Hull and Tottenham, but Fernandes is sure his experienced manager is the right man to ensure survival.

Fernandes added: “Let’s not make any bones about it. Our ambition is to survive. Fourth from bottom will do, absolutely. Harry told me, ‘We’re going to be fine’.”