It has been reported that Tony Hibbert has entered new contract talks with Everton. 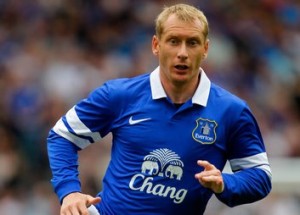 The 33 year old right-back is out of contract this summer and has made only four appearances for the Blues this term.

Blues boss Roberto Martinez told evertontv: “Tony Hibbert, we’re already sitting down and we want to share how Tony feels and how that conversation is going to go because in my eyes Tony has got a lot to offer at Everton still and we need to make sure that (the talks reach) a positive outcome.

“Maybe in a couple of a key moments, he’s picked up a couple of injuries that have stopped him playing more but I do value his contribution at the Club and his experience and I would love to keep a character like Tony Hibbert, who means so much to us.

“He’s played such a significant role and sometimes the fans don’t see that. Sometimes you can get mislead because you don’t see a player playing week in and week out and you can feel that they don’t have a major role in the football club.

“Tony has had a few niggles this season but in terms of his day-to-day work, he’s been magnificent and I’d go as far as saying he’s been paramount in keeping really strong standards in our training sessions, in making sure that the group was ready, helping out the youngsters and every time he has played he has performed well.”