Tony Pulis Admits West Brom ‘Were Off It’ At Arsenal 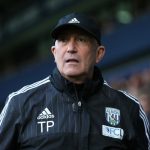 Reports are out claiming that West Bromwich Albion manager Tony Pulis felt his side were well below their best in Thursday night’s defeat to Arsenal.

The Baggies lost 2-0 at the Emirates Stadium in what the manager indicated was a lacklustre performance from a team who usually gives their all no matter the result.

“We were off it tonight,” he said. “The players have given me everything this year.

“We have played well at all of the big teams this year but not tonight. Sometimes you have to take defeat on the chin.

“So I think I will have to look at myself a little bit over that.”

Alexis Sanchez scored a pair of first-half goals to condemn Albion to a third-straight loss which sees them sitting 15th on the Premier League table.

Arsenal Should Have Won By More – Arsene Wenger