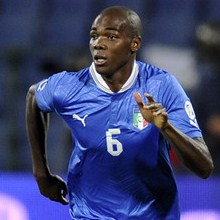 Reports have emerged that Torino president Urbano Cairo has slapped a €20 million price-tag on Angelo Ogbonna.

Premier League clubs Manchester United and Everton had scouts in the stands to watch Ogbonna yesterday in defeat to Inter Milan.

It is said that Cairo rejected an approach from AS Roma last summer and AC Milan have also considered the youngster as a replacement for Thiago Silva following his sale to PSG.

United and Everton, however, have the spending power to convince Cairo to sell.