It has been reported that Torino winger Alessio Cerci insists nothing has been agreed with Atletico Madrid. 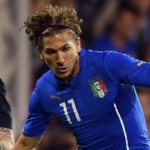 The Italian international had tweeted this week he was joining Atletico.

The tweet was deleted from his account 30 minutes after it appeared and the player has since insisted he did not send the message.

“I was playing the Playstation and someone hacked into my Twitter account and wrote a message which was false,” Cerci said to Gazzetta dello Sport.

“I have received so many telephone calls, including from the (Torino’s) press office that asked me what I had done and I didn’t know what was going on.

“I did not write that message and I didn’t cancel it either.

“Now I will try to find out who did this and take legal action.

“My future? I don’t know what will happen.

“There are still 12 days left until the end of the transfer window.”