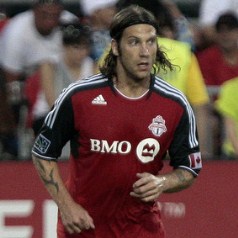 Torsten Frings has admitted that he is happy living the quiet life in Toronto after spending his entire playing career in football-mad Germany.

The 34-year old former Werder Bremen, Borussia Dortmund and Bayern Munich defender joined MLS club Toronto FC in June this year and has labeled his move as an ‘adventure’ whilst revealing he could have remained in Europe for more money.

“Everybody asked, ‘What do you want there?’ The press was shocked. But I’m not one for the spotlight, so I didn’t care. I thought it would be more quiet here, easier to live,” he told thestar.com on his decision to make the move.

“I decided I wanted to have an adventure.

“I had offers from Spain and Scotland. Money wasn’t the factor. I could have made a lot more money in Europe.”

And as for the standard of Major League Soccer, the former Germany international was pleasantly surprised.

“I don’t think (MLS) is as bad as people make it out to be,” Frings added.

“It definitely relies heavily on power and stamina, rather than skill.”