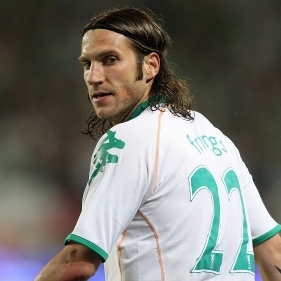 Werder Bremen captain Torsten Frings is on the verge of joining the MLS.

It is said that Bremen has refused to extend the contract of the 34-year old former Germany international, forcing him to look at other options regarding his future.

It is said that the defensive midfielder is wanted by Bremen in a coaching role but director of sport Klaus Allofs has made it clear that if he wants to continue his playing career elsewhere, then the club will hold no grudges.

“We know that he is disappointed. I can understand it,” said Allofs.

“Werder Bremen will offer him a job to train as a coach and to acquire the necessary license.

“He will give us his response in the coming days.

“We will make it possible for him to become a coach, but we will also accept his decision if he decides to continue his career at another club.”

It is said that the former Bayern Munich star told Bremen newspaper the Kreiszeitung Syke that he was disappointed with the club’s decision with a report on Univision.com furthering that he was considering an option to go to MLS.

“I have to accept the decision,” Frings said.

“Too bad, I would have preferred to finish after a more successful season.

“It was not about the money,” he added.

“I had no offer that I could accept or reject, because there was none.”