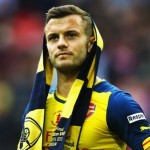 Reports are out claiming that Arsenal midfielder Jack Wilshere has declared that he is fully fit and can’t wait to join up with the rest of England squad ahead of the international fixtures this month.

The 23-year old has spent the majority of the second half of the season on the sidelines after suffering an injury in November but feels he is almost at peak condition as he prepares for the Three Lions’ friendly with the Republic of Ireland on June 7 and a Euro2016 qualifier in Slovenia on June 13.

He said: “I’m totally fit now. I’ll enjoy the next couple of days, and then we meet up with England on Wednesday and I’m looking forward to it.

“I haven’t played a lot this season and my fitness levels are still on the way up.

“I’m still trying to get as fit as I can and the summer comes at a bad time for me. But I’ll go away with England, hopefully get some game time, and we’ll reassess next season.” Arsenal Can Sign Loic Remy For Bargain Price Of £8 Million