A second-minute rocket from Tomas Rosicky was enough for an otherwise unconvincing Arsenal to beat Tottenham 1-0 in the north London derby at White Hart Lane. 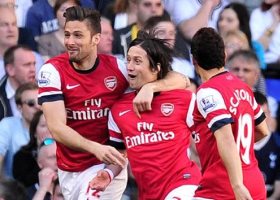 Tim Sherwood had plenty riding on his team’s performance having publicly castigated his players and they contrived to concede after only 70 seconds, Rosicky sending a sensational drive into the far corner from the edge of the box after the ball bounced nicely off Alex Oxlade-Chamberlain and into his path.

Tottenham’s early vulnerability – exposed once again when Oxlade-Chamberlain raced clear from Nabil Bentaleb at the half-way line, only to dink a miserable effort well wide of the goal when Hugo Lloris came off his line – even provoked Sherwood to rip his gilet from his torso and cast it to the floor in disgust.

Arsenal almost self-destructed at the start of the second half when Wojciech Szczesny made two handling errors, only for Nacer Chadli to fail to convert on either occasion, the second criminally so as he had a near open goal to aim at before seeing his shot blocked.

Sherwood’s frustration would not abate as Arsenal vastly underperformed yet clung on for a vital win which puts them joint second with Liverpool, four points shy of leaders Chelsea having played a game less. Tottenham remain in fifth and are seven points adrift of a Champions League place.