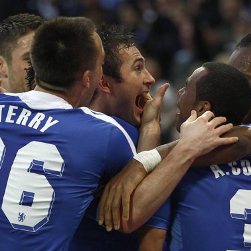 A phantom goal helped Chelsea to a 5-1 FA Cup semi-final win over Tottenham Hotspur at Wembley, setting up a final clash with Liverpool.

Spurs pulled one back, Gareth Bale with a tap-in after Emmanuel Adebayor was brought down by Petr Cech, who would have been sent off had the Welshman missed.

But, with the North London side chasing the game, Ramires clipped in a third, Frank Lampard buried a super free-kick, and Florent Malouda added a late fifth to send the Blues into the May 5 final against a Liverpool side who have also underachieved in the Premier League this season.