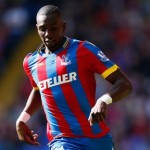 Reports have emerged claiming that Tottenham are ahead of Liverpool in the race for Crystal Palace winger Yannick Bolasie.

The Daily Star Sunday says White Hart Lane coach Mauricio Pochettino believes the ex-Plymouth and Bristol City playmaker would be the perfect addition to his set-up.

The Argentine wants a powerful wide man in N17, capable of creating goals on a regular basis – and weighing in with a few of his own.

Liverpool are also keen on Bolasie, but not at Palace boss Alan Pardew’s £30m valuation.

Andre Villas-Boas Pleased With The Performance Of Erik Lamela