Reports are out claiming that Tottenham boss Mauricio Pochettino has jumped to the defence of goal shy striker Harry Kane. 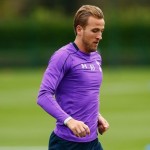 The England international striker has managed only two goals in 16 appearances since for Tottenham and is yet to get off the mark in the Premier League this season.

“He was on the bench against Qarabag but I think he needs to play to have the opportunity to score,” Pochettino said.

“We need to stop speaking about Harry Kane, we need to let him do his job. The most important thing is I’m very happy with his effort, the way he has been playing.

“Strikers need to score but it is only a matter of time, the goal is coming.

“You always need to try to ask why – he needs to improve, we need to ask why to improve his performance in games.

“This is a tough moment because he needs to score because he is a striker, but around the club, in the changing room, we believe in him.”