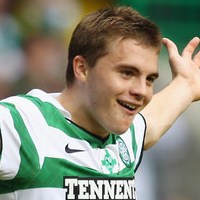 Harry Redknapp is said to be preparing a bid for Celtic midfielder James Forrest.

The Scottish Sun reported that the Tottenham boss dispatched chief scout Ian Broomfield to Parkhead on Saturday to run the rule over the 20-year-old winger.

The Premiership giants have been tracking the Scotland international for months and they’re now poised to make their move when the transfer window reopens in two months.

Forrest has two and a half years of his current deal still to run and Celtic are understood to rate him at £10million.

Yet Tottenham are ready to test the Glasgow club’s resolve with a bid of around £7m. Liverpool To Do Battle With Tottenham For Palermo Star Josip Ilicic