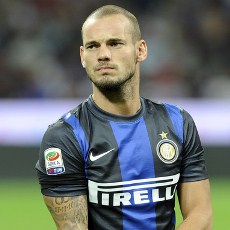 Interesting transfer news are out claiming that Tottenham are moving for Inter Milan outcast Wesley Sneijder.

The Mirror claims that Sneijder has sparked the biggest transfer scramble of the January window after Inter Milan began negotiations to offload their Dutch ­playmaker.

Tottenham chairman Daniel Levy is interested, as Spurs look to strengthen for a push towards Champions League qualification, but they will have to move quickly to fend off strong interest from all over Europe.

But a move to Old Trafford looks unlikely, as the 28-year-old does not get on with Holland team-mate and United striker Robin van Persie.