Reports have emerged claiming that Tottenham are in pursuit of Malaga’s Ignacio Camacho. 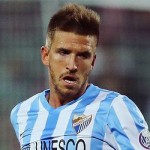 The Daily Mirror suggests that the Spanish club have received several inquiries from Spurs regarding the 24-year old.

Spanish midfielder Camacho was a target for Inter Milan, Atletico Madrid and Napoli in the summer but Malaga were not keen to sell their prized asset.

However, more recently it has emerged that the Andalusian outfit are prepared to listen to offers of around €20million for Camacho who has been at La Rosaleda since joining from Atletico in 2011.