Reports are out claiming that Manchester City goalkeeper Joe Hart is a target for Tottenham. 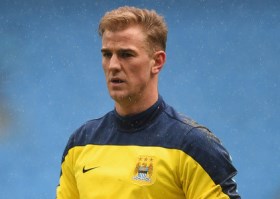 The Mirror claims that Spurs expect super-rich Paris Saint-Germain to come for Hugo Lloris in the summer, and they are looking at potential replacements.

Manchester City’s Hart is a target, if available, but would cost a fortune.

City were linked with Inter Milan keeper Samir Handanovic, along with Spurs, over the weekend.