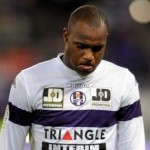 It has been reported that Toulouse goalkeeper Ali Ahamada is being tracked by Tottenham.

The People reported that the 23-year-old has told his club he won’t be signing a new deal next summer when his contract runs out.

The France Under-21 international is also interesting Portuguese giants Benfica and Valenciennes in his homeland.

Spurs already have Hugo Lloris and Michel Vorm in their ranks but No1 Lloris is wanted by several top clubs on the continent.