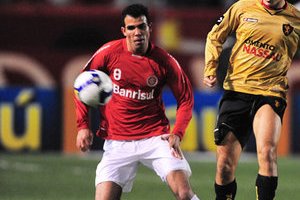 Interesting transfer news are out and it has been reported that Tottenham are closing in on a £14 million deal for Internacional midfielder Sandro.

Local newspapers have reported that Sandro has long been linked with a move to White Hart Lane but found his path to the Premier League blocked by work permit regulations.

However, after being named in the national squad by Brazil manager Dunga for the recent World Cup qualifiers, Sandro’s case for a move to England has strengthened.

Sandro, now age 20, burst onto the scene while captaining the Brazil Under 20 team and has also been linked with both Real Madrid and Barcelona.

Sandro’s deal hinges on Tottenham paying a group of club investors who own 30 per cent of the player’s registration.

However Tottenham is confident of sealing a move for Sandro with boss Harry Redknapp keen to add some more steel to his midfield in January. Kranjcar : There Was Frustration Behind My Goal