Reports are out claiming that Tottenham are in advanced talks for Swansea City pair Ben Davies and Michel Vorm. 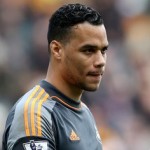 The Mail on Sunday reported that Tottenham have struck a deal with Swansea to sign Davies and Vorm with Gylfi Sigurdsson and cash going the other way.

The £15million arrangement sees Tottenham pip Liverpool to both targets.

Davies, a 21-year-old Wales international, has moved to White Hart Lane despite Liverpool’s overtures because he believes he will play more regularly.