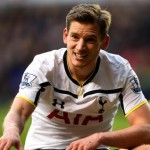 It has been reported that Tottenham defender Jan Vertonghen concedes their season could be shaped by the coming two weeks.

On Saturday, Spurs tackle the north London derby at White Hart Lane against an Arsenal side who are finding form themselves after seven wins in their last eight matches in all competitions.

Three days later, Spurs travel to Anfield to face Liverpool, who they have not beaten in their last four attempts in the Premier League.

Vertonghen said: “I don’t want to say they will be decisive but these games are very important for us. A home game against Arsenal is always something special and against Liverpool, we haven’t done too well in the last couple of years.

“But we have to go there to try to win. We won more big games than we did in the last two years but we lost a couple home games stupidly, so we need to win points against Arsenal and Liverpool to achieve fourth places. That’s very important.”