Reports are out claiming that Tottenham defender Michael Dawson is wanted by four Premier League rivals. 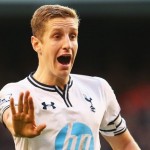 The People reported that Hull boss Steve Bruce is leading the chase and wanted to land the former England centre-half in an £8million double swoop alongside Jake Livermore.

But he faces a fight for Dawson – with West Ham, Crystal Palace and newly-promoted QPR also interested.

Bruce, who took Hull into the Europa League after reaching last month’s FA Cup Final, must boost his squad to cope with the demands of Premier League and European football next season.