It has been reported that Tottenham boss Mauricio Pochettino is aware of talk of moving for Manchester United striker Javier Hernandez. 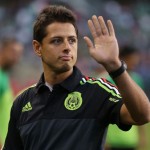 Chicharito has been linked with Spurs this month.

But Pochettino says: “About Javier Hernandez, those are rumours and nothing more.

“There is nothing concrete.

“He is a Manchester United player and logically a lot of names are getting suggested for Tottenham and Javier is just one more.”