Reports are out claiming that Tottenham are ready to hand Dele Alli a new contract. 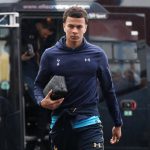 The Sunday Mirror reported that Alli is to be offered a new, long-term contract worth around £40million to to keep him at Tottenham. Spurs are moving amid growing interest from Real Madrid.

It will be Alli’s THIRD new deal in the space of just 16 months. The 21-year-old midfielder signed a revised contract last September that put him in the £55,000-a-week bracket and runs to 2022.

Now the Spurs hierarchy are ready to double Alli’s money to put him on a par with the likes of Harry Kane and Hugo Lloris as the club’s top earners.

The new deal will extend his stay to at least 2023 and guarantee he will earn a minimum of around £40m in that time.