It has been reported that Tottenham are chasing West Bromwich Albion striker Saido Berahino. 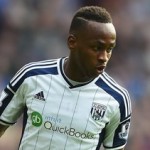 The Daily Mail claims that Tottenham know Berahino’s form has not gone unnoticed elsewhere, with Everton, Arsenal and Chelsea all having watched the forward last season.

Spurs are determined to stay ahead of the competition in the race for Berahino and are set to ramp up their interest in the coming weeks.

Berahino is known to be settled at the Hawthorns, though interest from one of England’s elite clubs could leave the youngster with a decision to make.

The forward signed a new three-and-half year deal in December, but could be in line for another improved deal should he continue his hot-streak.