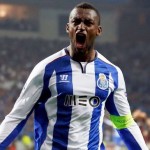 Reports are out claiming that Tottenham are preparing a bid for Porto striker Jackson Martinez.

The Daily Star Sunday says the in-form Colombian has scored 23 goals this season and is rated at £35million.

Tottenham hope to strike a deal with the Portuguese club despite competition from the likes of AC Milan, Arsenal, Manchester United and Everton.

Spurs aim to balance the books by offloading some of their fringe players and may even be able to tempt Porto into taking Emmanuel Adebayor or Roberto Soldado.