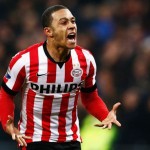 Reports are out claiming that Tottenham chiefs aren’t giving up on winning the race for PSV Eindhoven winger Memphis Depay.

The Dutch international has been a long-term target for Spurs, but they face being crowded out by bigger rivals.

The People says Tottenham have asked to be informed when the bidding starts, but according to friends the player is keen to join Liverpool. Alexander Buttner Determined To Fight For His Place At Man Utd