Reports are out claiming that Tottenham fear losing defender Jan Vertonghen to Barcelona this summer. 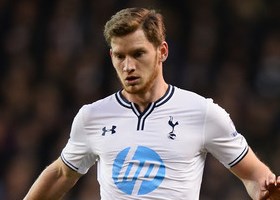 The Daily Star reported that the Belgium international centre back is on a list of names being considered by Barcelona to replace Carles Puyol, who announced this week he will leave the Nou Camp at the end of the season.

The 26 year old has hinted he could leave should Spurs fail to qualify for the Champions League.

The former Ajax defender is also being linked with Liverpool.