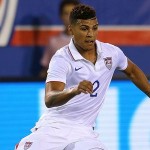 It has been reported that Tottenham fullback DeAndre Yedlin has high hopes to facing Manchester United striker Wayne Rooney later in the year.

The USA international arrived in January from Seattle Sounnders.

He told Kick TV: “The player I am most looking forward to play against, Wayne Rooney.

“It’s just a name that even in America in known, so I think it would be a great challenge and a cool thing to put on the resume.”