Reports have emerged claiming that former Tottenham Hotspur star Teddy Sheringham still believes that Arsenal are currently in the hunt for the Premier League title. 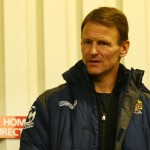 Following a string of poor results, Arsenal currently find themselves a sizeable 11 points off of leaders Leicester City at the top of the Premier League table and many believe that the Gunners now do not stand a chance of lifting the trophy that has eluded them since 2004.

Sheringham, whose former club Spurs sit second, is not writing off Arsenal’s chances as of yet though and believes that the experience of Arsene Wenger’s men could help them reduce the gap in the coming weeks.

He said: “They have been there before, they know what it takes. For Leicester and Spurs, this is new territory. The closer the end of the season comes, the more nerve will be a factor. At the moment, the top two are responding to the challenges.

“Take the last weekend before the international break. Leicester won at Crystal Palace and that is never easy. Spurs HAD to hit back – and they did straight away by beating Bournemouth. They had it won in the first 20 minutes.

“But it won’t always be like that. Between now and the end of the season, they will have to be patient. That is what I found out when I was at United.

“Experience is key in this situation – and that is why I would not rule Arsenal out of contention. They know what it takes. They have won the title and know all about the pressure. And they are still up there, despite numerous ­injuries.”