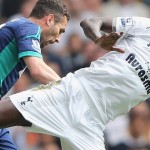 The Welshman curled a superb 25-yard shot into the top corner but Arsenal’s win at Newcastle leaves Spurs in the Europa League next season.

David Vaughan was sent off for Sunderland with 15 minutes left as the hosts piled on heavy pressure.
Bale had a strong first-half penalty appeal turned down before Aaron Lennon hit the post after the break.