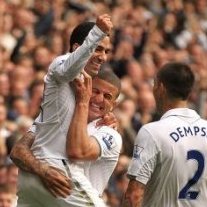 Tottenham Hotspur stretched their unbeaten streak to six matches after easing to a 2-0 victory over a poor Aston Villa side at White Hart Lane thanks to two second half goals in the space of ten minutes.

A fortuitous first goal in Spurs colours for Steven Caulker off the back of his heel set Spurs on the way before Aaron Lennon celebrated his recall to the England squad with his first Premier League goal of the season.

The big talking point before kick off was the benching of Brad Friedel for Hugo Lloris, bringing to an end to the American’s run of 310 successive Premier League outings. But Lloris had little to do as his team dominated proceedings and could have won even more easily but for squandering a hatful of chances. Inter Milan In Talks With Tottenham For Gareth Bale