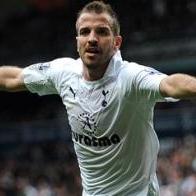 Tottenham Hotspur beat Blackburn Rovers 2-0 at White Hart Lane, putting Harry Redknapp’s side back to fourth in the Premier League and sending Steve Kean’s team closer to the drop.

Rafael van der Vaart fired home from close range midway through the first half of a match the hosts utterly dominated without truly killing off until Kyle Walker’s spectacular free-kick with 15 minutes remaining.

They could and should have scored a hatful, overplaying it at times in the style of North London neighbours Arsenal, also hitting the woodwork twice and spurning a couple of good opportunities.

The victory – ending a run of three defeats – means Spurs move back to fourth, ahead of Newcastle on goal difference and one point clear of Chelsea as the race for the final Champions League place goes to the wire.

The visitors, meanwhile, failed to muster a single shot on goal – the first time that has happened since West Brom drew with Manchester City in 2004 – a terrible performance that puts them three points short of safety with two matches remaining.

Gareth Bale Will Be Welcomed At Real Madrid – Marcelo