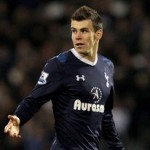 Tottenham will give a fitness test to Mousa Dembele (hamstring) before deciding whether to include the midfielder in the squad. Striker Emmanuel Adebayor (knee) and midfielder Jake Livermore (hamstring) are available they sat out the 2-2 draw at Wigan last week. Midfielder Sandro (knee) and defensive duo Younes Kaboul (thigh) and William Gallas (calf) are unavailable.

Gaston Ramirez and Danny Fox will both miss Southampton’s trip. The duo serve the first of their three-match bans at White Hart Lane, having both been sent off in last weekend’s heavy home defeat to West Brom. There is some good news, though, as Luke Shaw looks set to feature after an ankle injury.

Andre Villas-Boas: “The information that I have from the club is that the player [Gareth Bale] is here to remain, independent of the objectives of Champions League qualification being achieved. Whatever price tag the player has doesn’t matter because he’s our player. He’s a player we have to hold on to for the remaining seasons to make sure that we continue to progress. We understand that the more awards, the more recognition the player will have, but the club has to move forward by holding on to its best players.”

Mauricio Pochettino: “I am really happy with how the club is doing, with my time here. We can always improve upon things and we are in that situation of always wanting to learn new things, with ambition and with a desire to keep on working, looking forward and learning new things. I am only thinking about the next three games and nothing else. We will have enough time to talk about next season’s goals once we have achieved the goals we have set for ourselves this season.”