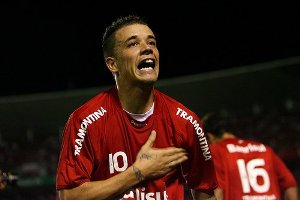 Interesting transfer news are out and it has been reported that Tottenham manager Harry Redknapp is chasing former Portsmouth midfielder Andres D’Alessandro.

The Argentina international midfielder is currently playing in Brazil with Gremio and is reported to be keen to make a comeback to Europe.

D’Alessandro’s agent told reporters that Directors from Borussia Dortmund has came to Porto Alegre to talk about a possible move.

He also revealed that even Premier League club Tottenham Hotspurs and clubs from the Emirates are interested in signing his client.

Redknapp knows D’Alessandro very well after working with him while in charge of Pompey.