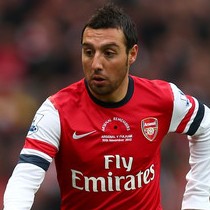 It has been revealed that Tottenham legend Glenn Hoddle is impressed by Arsenal midfielder Santi Cazorla.

He told Absolute Radio: “I think that might come as Arsenal improve and get better and better, but I do like him, I think he is a wonderful little player and he has got the added ingredients that he can play off both feet. If you are two footed player in any standard of football there is not many, and this kid can play off left foot or right foot and to be honest, when you have got that ability Ian, you can play in 360 degrees…

“Whereas so many players are, they are playing in quarter of the pitch all the time because you know where they are going to go. And if this kid can score goals and make goals and he’s playing in the pocket, which is great position for him, it really is, so I think Arsenal fans have got a little gem there. They have lost Fabregas but they have replaced him with another little Spaniard that, what I think, will get people on the end of their seat and they’ll enjoy watching him.”