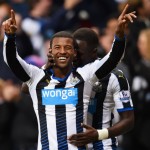 Reports have emerged claiming that Tottenham will make a serious move for Georginio Wijnaldum once they secure the signature of AZ Alkmaar’s Vincent Janssen.

The Telegraph is of the belief that Mauricio Pochettino is very keen on Dutch midfielder Wijnaldum and will turn his attention to that once the £17million transfer of Dutch striker Janssen goes through.

Wijnaldum joined Newcastle from PSV Eindhoven last summer and despite impressing with 11 goals and five assists in his debut Premier League season, was unable to guide the Magpies to safety.

With the Tyneside club dropping to the Championship, the St James’ Park future of the 25-year-old is clouded and he could quite possibly be on his way to White Hart Lane if Spurs can sort out a deal.

Wijnaldum recently expressed his interest in remaining in England’s top flight having joined for £14.5m after leading PSV to the Dutch title in 2014/15.