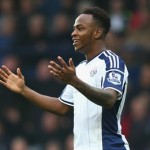 Reports are out claiming that Tottenham are preparing a January bid for West Bromwich Albion striker Saido Berahino.

The Daily Mail reported that Spurs have now made initial enquiries over a January switch for the forward, who is rated at £25million.

The England international is emerging as Tottenham’s No. 1 target when the transfer wind re-opens next week.

The White Hart Lane side will be one of the most active clubs next month with players moving in and out of north London.

Five months into the new season, Mauricio Pochettino remains unconvinced by a number of the stars he inherited when he arrived from Southampton in the summer.