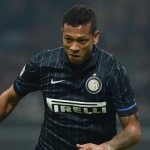 Reports are out claiming that Fredy Guarin is seeking talks with Inter Milan chief Piero Ausilio in the coming days.

The Colombian international midfielder is aware of January transfer rumours, with the likes of Juventus, Tottenham and Liverpool all mentioned as potential destinations.

However, Guarin is keen to stay with Inter and wants to know from Ausilio what their plans are for him.

Calciomercato.com reported that the 28 year old wants a quick decision from Inter over his future so if he is to be sold, he has the time to consider all available offers.

For the moment, Inter coach Roberto Mancini is reluctant to part with Guarin without replacements lined up.