It has been reported that Tottenham are ready to compete with Liverpool for MK Dons star Dele Alli. 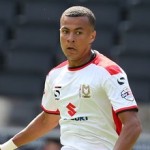 And the 18-year-old did not disappoint as he shone in the centre of the park amongst United’s multi-million pound midfield.

Alli, an England Under 19 international, is on fire this season with six goals in 11 games including a hat-trick last weekend against Crewe.

Liverpool had a £3.5million bid rejected by MK Dons in the summer, but Spurs are set to fight it out for his signature in January.