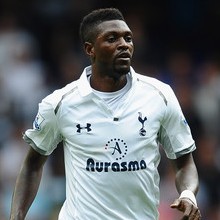 Tottenham boss Andre Villas-Boas has revealed that Emmanuel Adebayor is in his plans.

The 28-year-old former Arsenal striker has played second fiddle to Jermain Defoe so far this term, and Villas-Boas says he will have to be patient.

“Obviously, every player wants to play, at the moment we are using the structure of one striker and Defoe has been doing extremely well,” said the Spurs boss.

“I think Ade has done extremely well in the games where he has come in for the squad, certainly he is in contention for games where we play with two strikers.

“At the moment we haven’t found the comfort in that formation yet, but in the future when we use it, when we rotate the strikers he will be back in contention.”

When asked whether the striker was actively seeking a move, Villas-Boas responded.