It has been revealed that Tottenham have told Inter Milan to forget about trying for Jan Vertonghen. 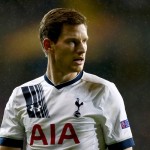 The Daily Star claims that Inter’s sporting director Piero Ausilio travelled to London last week to run the rule over the defender.

He was in the stands to see Vertonghen play 90 minutes for Spurs in their 2-1 Europa League win over Anderlecht.

Ambitious Inter have put the Belgium international on a shortlist of players they are keen to sign next summer.

But Spurs, who extended the 28-year-old’s contract before the start of the season, insist he is not for sale.