It has been reported that Tottenham boss Tim Sherwood felt his side ‘outplayed’ Arsenal at White Hart Lane on Sunday. 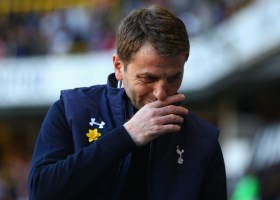 Spurs conceded to Tomas Rosicky’s thunderbolt inside two minutes in the North London derby before controlling large portions of the contest with plenty of possession and goalscoring efforts.

Tottenham only managed to get two shots on target but Sherwood believes his charges were the better of the two sides as they lost 1-0 to the Gunners for the second time this campaign.

The 45 year old told Sky Sports : “I thought we were better than them. I thought we played well and created chances today. We played on the front foot and defended together,”.

“No-one can say we deserved to lose that game. No-one tries to miss chances, if you’re in there to miss them, I can’t complain.

“We can’t just do that in north London derbies. If the players give me that between now and the end of the season, no problem, we’ll be where we need to be.

“The result for Arsenal will paper over a lot of cracks, they were outplayed today and they’ve got to admit that.

“We played better today, a lot better than we have recently. We deserved to win that game, not lose it.”

The loss saw Spurs remain fifth on the Premier League table on 53 points, seven behind fourth-placed Manchester City, and two ahead of Everton in sixth. Arsenal Boss Wenger Not Expecting Zagreb Defeat To Be Overturned