Reports are out claiming that Arsenal legend Thierry Henry believes the Gunners did not play with enough desire during the first 45 minutes of their 1-1 draw with Tottenham on Sunday. 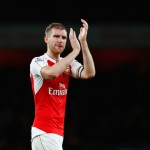 Harry Kane put Spurs ahead 1-0 after 32 minutes, with a late strike from Kieran Gibbs earning a point for Arsenal.

Henry said on Sky Sports : “I think Arsenal did enough to get back in the game through their desire, something they didn’t have in the first half,”.

“For me, you know that Man City drew their game and you can get two points ahead of them, and [Arsenal] did not take that opportunity. They didn’t play well, and you have to win these types of games when you are not playing well.

“No matter how, no matter what, especially against Tottenham. It was more about how Tottenham played at the Emirates Stadium – they wanted it more, they had more desire for a longer period.

“Yes, Arsenal came back with the right attitude – and Flamini was the symbol of it – but it was more an Arsenal focused on getting the ball in the box and winning headers.

“But I go back to the same thing; Man City lost two points today and it was a great opportunity – especially against Spurs. You have to win these games [to win the league], especially when you are not having a good day. That’s how you win the Premier League.”