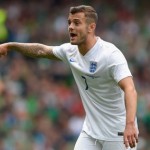 Reports are out claiming that Arsenal midfielder Jack Wilshere has revealed that Tottenham players don’t talk to him at England national team camp.

The England international was charged by FA for using expletives directed at Tottenham during the Gunners’ victorious FA Cup parade recently.

Wilshere, who linked up with Three Lions last week, said: “It [charge] hasn’t really been mentioned, it was the day we arrived.

“A few of the lads gave me a bit of banter about it. The Tottenham players? No, they don’t talk to me!”

Spurs players such as Harry Kane, Andros Townsend, Ryan Mason and Kyle Walker have recently been involved with England squads with Townsend being the only current presence under Roy Hodgson.