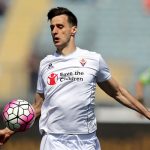 Reports are out claiming that Tottenham are eyeing Fiorentina striker Nikola Kalinic.

The Fiorentina striker has emerged as a target for Spurs boss Mauricio Pochettino, who has admitted he’s looking for reinforcements up front.

But the Serie A side are keen to hang on to Kalinic, who spent two years at Ewood Park between 2009 and 2011.