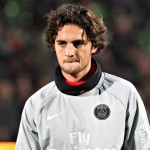 Reports are out claiming that Tottenham are in talks with PSG to take Adrien Rabiot on-loan in the winter market.

It broke earlier this month that Spurs football chief Franco Baldini had struck personal terms with Rabiot’s camp ahead of a move in January.

The 19 year old defensive midfielder penned a new deal to 2019 with PSG earlier this season, but after only four appearances, is desperate to move on.

L’Equipe says Spurs are now in talks with PSG about taking Rabiot on a six-month loan ahead of discussing a permanent deal in June.

For his part, Rabiot would welcome the chance to move to London, where he would expect to be a regular under manager Mauricio Pochettino.

Arsenal are also interested in signing the talented France U21 international. Eden Hazard To Turn Down PSG For Chelsea Stay