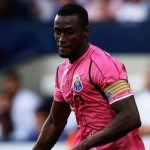 Reports have emerged claiming that Tottenham are pushing to agree terms with Porto over the signing of Jackson Martinez.

The Daily Express says according to Portuguese reports, Spurs are desperate to land their £40million-rated forward to bolster their attacking threat.

Martinez has frequently been targeted by Premier League clubs including Liverpool and Arsenal – but should Spurs stump up the full fee, they are more than capable of capturing their man.

The Colombia international has stated he expects to leave Porto in 2015.